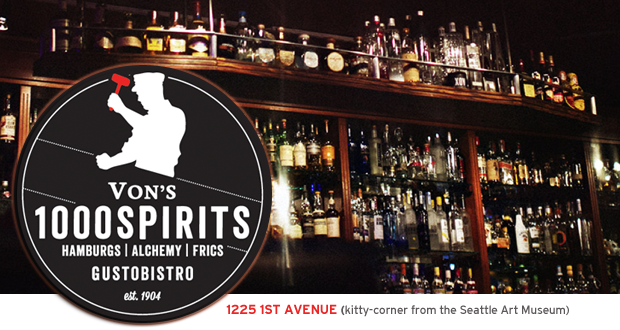 Harbor Steps is already the center of a vibrant, active Seattle neighborhood. With the addition of a hot new restaurant, this downtown community is becoming even more of a destination.

The February 15th grand opening of Vonâ€™s 1000Spirits is being eagerly anticipated by residents and the downtown crowd alike. â€œTo have this new restaurant by an established Seattle restaurateur right in our home will be great,â€ says Christel Cangas, General Manager at Harbor Steps. â€œBeing right on 1st Avenue, it will add a lot of life to that corner. Weâ€™re all looking forward to having a fun new meeting place for residents, plus itâ€™ll be a great place for people to stop after work for a drink,â€ she says.

Von’s 1000Spirits is a new concept based on the original Von’s, formerly located at 619 Pine Street. The Harbor Steps restaurant will take over the space once occupied by the Impanema Brazilian Grill. â€œThe space is completely renovated and very modern,â€ according to Christel, â€œwith more than double the bar space. Plus they’re offering breakfast, and they’re currently the only restaurant on the block to do so.â€

The opening day food menu features the Delmonico Prime Hamburg, their take on an artisanal hamburger and Frics, sourdough pizzas roasted in an almond wood-fire oven. The drink menu for the bar, Alchemy, complements what the owners have dubbed a â€œGusto Bistroâ€ and features Vonâ€™s famous Scratch Martini for $5 and Seattleâ€™s largest collection of fine spirits.